A pharmacist in a small town north of Toronto is facing drug trafficking charges in a case that has police warning the public about the dangers of abusing fentanyl patches and oxycodone.

The drugs and vice unit of the York Regional Police began investigating the Keswick Pharmacy last fall. The pharmacy is located at 132 The Queensway South in the town of Georgina, about 80 kilometres north of Toronto.

Police say they’d received a tip that the pharmacy owner was selling drugs, including fentanyl and oxycodone, to people without prescriptions. Both drugs are used for pain treatment but have also been known to be addictive.

In addition to the pharmacist, seven other people face charges that range from conspiracy to commit an indictable offence and narcotics trafficking to weapons offences. A full list of charges is available here on the York Regional Police website. 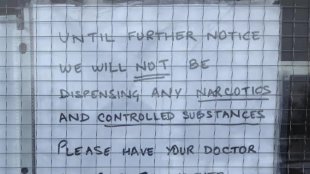 Police say their investigation found that OxyNeo tablets were being sold in unmarked prescription bottles. OxyNeo is a  brand name of the strong painkiller oxycodone.

Police executed a search warrant at the pharmacy and other locations on Thursday. Police say they seized drugs, firearms, currency and arrested a number of suspects.

The College of Pharmacists has been notified.

Police also warned the public about the dangers of using prescription drugs for recreational use. Police say fentanyl, an opioid-based pain killer available as a skin patch, is a particular problem. The drug is “100 times stronger than morphine,” say police and can lead to overdose for users who inject or smoke gel from the drug.