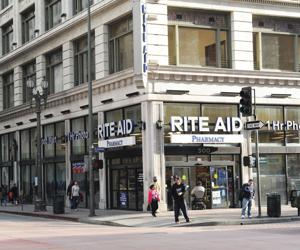 The former Rite Aid pharmacist accused by California Attorney General Kamala Harris of illegally dispensing tens of thousands of painkillers and anti-anxiety medication pills has had her license suspended for 90 days and will be on probation for five years.

BE THE FIRST TO READ THE LATEST DOWNTOWN NEWS, FOOD AND CULTURE STORIES. CLICK HERE AND SIGN UP FOR OUR DAILY HEADLINES NEWSLETTER.

The disciplinary order from the state Board of Pharmacy follows an investigation into the Rite Aid at 500 S. Broadway and Anne Chung, the previous pharmacist-in-charge. The board filed a 41-page complaint in March accusing Chung and the pharmacy of unprofessional conduct, gross immorality, “clearly excessive furnishing” of controlled substances between 2009 and 2012 and subverting a state investigation.

The quantity of painkillers and anti-anxiety prescriptions that were being dispensed at the pharmacy triggered the curiosity of LAPD Senior Lead Officer Sean Lewis, who contacted a pharmaceutical inspector. The investigation found numerous “abnormalities and discrepancies,” according to the complaint. Virginia Herold, executive officer for the Board of Pharmacy, called the action a “relatively stiff sanction.” It stipulates that, after serving her suspension and during her probation period, if Chung wants to work at a pharmacy she must be supervised by another pharmacist. If she violates her probation at any time, she would lose her license.

Chung would not speak in depth with a reporter who visited her home this month. The Board has yet to determine if the store itself will face any penalties.